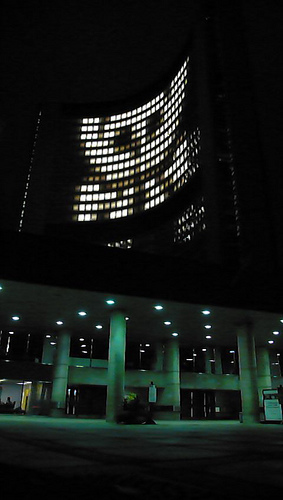 Instead, I argue that precisely because we are in the information age, we need a movement—akin to the environmental movement—to preserve the public domain. The explosion of industrial technologies that threatened the environment also taught us to recognize its value. The explosion of information technologies has precipitated an intellectual land grab; it must also teach us about both the existence and the value of the public domain. This enlightenment does not happen by itself. The environmentalists helped us to see the world differently, to see that there was such a thing as “the environment” rather than just my pond, your forest, his canal. We need to do the same thing in the information environment.

We have to “invent” the public domain before we can save it.
[…]
The one piece of advice I would offer is to make sure that you really talk it through with everyone at the press and get them to understand the way the web works. While university presses might want to experiment only with a few titles, when it comes to those titles they need fully to embrace the idea — creating an excellent website for the book (or allowing the author to do so), allowing multiple formats of the book to be made available (pdf, html etc), being excited rather than horrified if the book gets mentioned on a blog and downloads spike. The last thing you want is a publisher who has grudgingly agreed to a Creative Commons license but who then sabotages every attempt to harness the openness it allows.

OSCAR ALVARADOS´S free animated short film.
Created only with Blender (www.blender.org)
This short film is a free adaptation from the original film “Nosferatu” directed by Frederick Murnau in 1922.
MURNAU THE VAMPIRE was presented for first time in the BLENDER CONFERENCE in Amsterdam en 2007.
In 8 months Oscar Alvarado works in the production of MURNAU THE VAMPIRE, and the entire short (27 minutes) was made only by Oscar.
The soundtrack and the musical theme was composed by the italian goth band, “Theatres des Vampires”.